Cobra Golf have today announced a new line of clubs… the RADSPEED.

The name was inspired by its key, innovative technology, Radial Weighting, with a goal of maximising performance for the full range of golfers through optimised weighting and an array of advanced technologies. The range consists of a new family of RADSPEED Drivers, Fairways and Hybrids as well as RADSPEED Irons.

The design concept originated from a popular formula in engineering called Radius of Gyration, which is the distance from the club’s centre of gravity to each weight or technology location.

The entire RADSPEED range is also equipped with the highly rated COBRA CONNECT, meaning yuo can delve deeper into the analytics of your game.

“Our new RADSPEED drivers represent a true breakthrough in performance,” said Tom Olsavsky, Vice President of R&D, COBRA Golf. “Our engineers have outdone themselves by pushing the Radius of Gyration to new levels and delivering three distinct drivers aimed at three different types of golfers. With the RADSPEED driver family, COBRA can truly offer optimised performance for everyone from Tour players to weekend warriors and those who need help correcting a slice.”

The RADSPEED DRIVER is designer for faster swingers who want distance through faster ball speeds, low spin and trajectory control. With a 460cc traditional shape, and forward-biased Radial Weighting to appeal to the better player seeking low spin, low launch and workability. Using a lighter T-Bar Speed Chassis and a thinner Carbon Fiber Wrap Crown, engineers were able to save 13g of weight that they could reposition forward to lower the CG and produce more speed. Two adjustable weights in the front and back allow players to fine-tune their desired launch and spin performance. The new RADSPEED driver also features a CNC Milled Infinity Face, which requires about 25 minutes of milling for every single clubface produced.

The RADSPEED XB is for players who want plenty of speed and distance but value forgiveness.  the RADSPEED XB is the answer. The 460cc clubhead utilizes rear-biased Radial Weighting to deliver the fastest and straightest ball flight of the three models. For golfers that preferred COBRA’s 2020 SPEEDZONE Xtreme driver, the RADSPEED XB delivers even more ball speed and lower spin while maintaining that extreme stability.  It also features a titanium T-Bar Speed Chassis and Thin-Ply Carbon Fiber Crown, CNC Milled Infinity Face and Radial Weighting Technology.

The RADSPEED XD for those who want distance while reducing their slice or creating a draw. Cobra say it is their longest and fastest draw-biased driver designed to provide maximum distance and slice-fighting power.  This second “Xtreme” model features the same slightly oversized 460cc profile as the XB, but with heel-biased Radial Weighting. 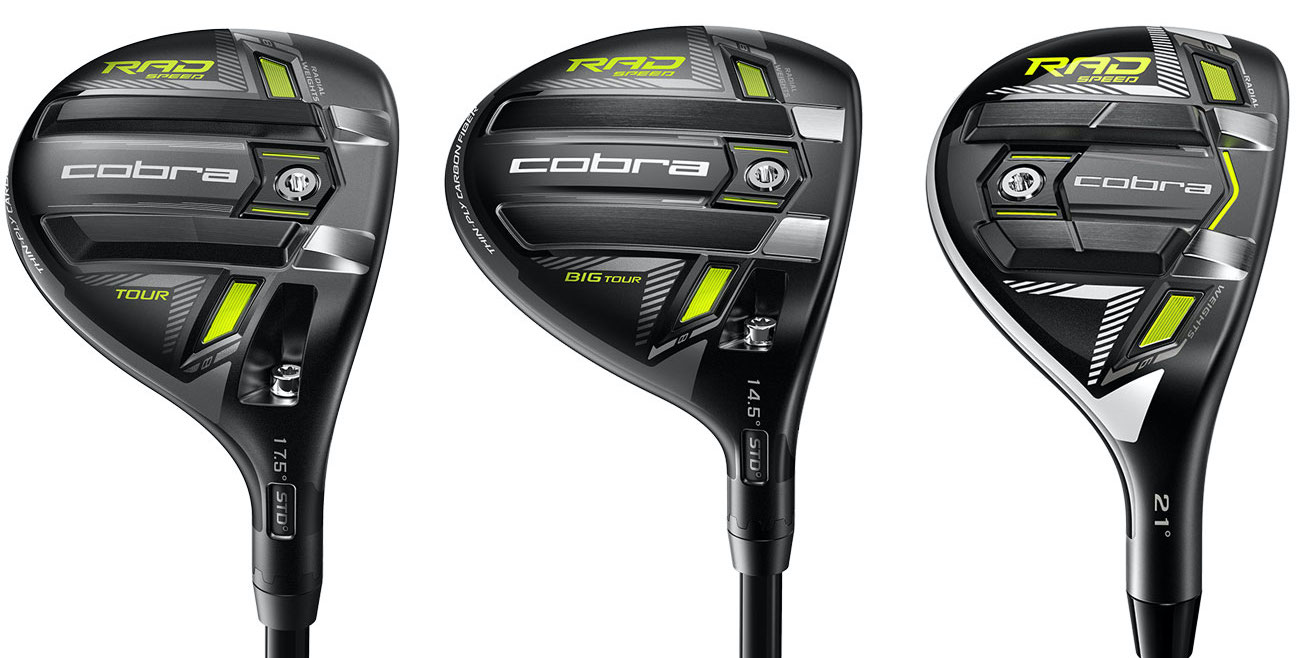 The RADSPEED hybrids utilise COBRA’s innovative Radial Weighting Technology with the emphasis on extreme front weighting for ultra-low spin, faster ball speed, and increased distance. A forged, high-strength steel face insert, and amd Hollow Split Rails combine to create a lower CG location, higher launch angles, more distance, and enhanced versatility from a variety of lies. The Baffler sole rails are a signature feature of COBRA’s fairways and hybrids, and allow the club to glide effortlessly out of the fairway, tight lies, thick rough and even bunkers. The RADSPEED Hybrids are available in both standard (Gloss Black/Turbo Yellow colorway) and ONE Length (Matte Black/Red/Blue/White) models.

Cobra say the RADSPEED Irons are their “most technologically advanced irons to date”. The RADSPEED Variable and ONE Length Irons feature game-changing innovations including Radial Weighting and debut the first ever 3D printed nylon medallion.

This first ever 3D printed nylon medallion utilises an intricate lattice structure to save weight and fine-tune feel. Upon closer review, golfers may notice the detailed lattice structure provides a window into the cavity and through the medallion.

With a name inspired by its key technology, Radial Weighting, the design of these irons is aimed at maximising performance through the strategic placement of weight relative to the Centre of Gravity (CG) to optimise speed and forgiveness.  COBRA engineers discovered that by positioning more mass low on the heel and toe (the two furthest points from the CG while remaining low in the head), they could lower the CG while dramatically improving the stability of the clubhead. 10g, in the form of a screw-in weight, is positioned in the toe and 3g of mass, is positioned in the heel to create the best combination of low CG, and high MOI for the fast ball speed and high launch. The RADSPEED irons are also avaiable in both Variable and One Length.

All RADSPEED products will be available from January 29, 2021 at our Professional Shops.

Written by Kevin Paver • 8th December 2020
share
back to blog