up close to the Jurassic Coast – a guest post

Think of exploring Dorset’s Jurassic Coast and you probably think of trips to the beach and cliff-top walks to see the famous arch of Durdle Door. However, for the more adventurous, there is another way to explore.

For a real bucket-list experience you can join a kayak tour of the Jurassic Coast and paddle right from Lulworth Cove along the coastline to Man O’War Bay, and through the arch of Durdle Door.

Kayaking through Durdle Door had been on my ‘to-do’ list for quite a while, and that eagerness showed when I arrived at Lulworth Cove at 8:15am, a full 30 minutes before the arranged meeting time. It seemed that the entire village was still asleep at this time and despite walking up and down the main streets for a while on the lookout for a cafe or coffee shop, nothing was yet open and I would have to wait until after the trip for a proper cup of coffee. I sat near the beach to kill some time before my trip began, it was beautifully peaceful with not another person around in the picturesque cove. 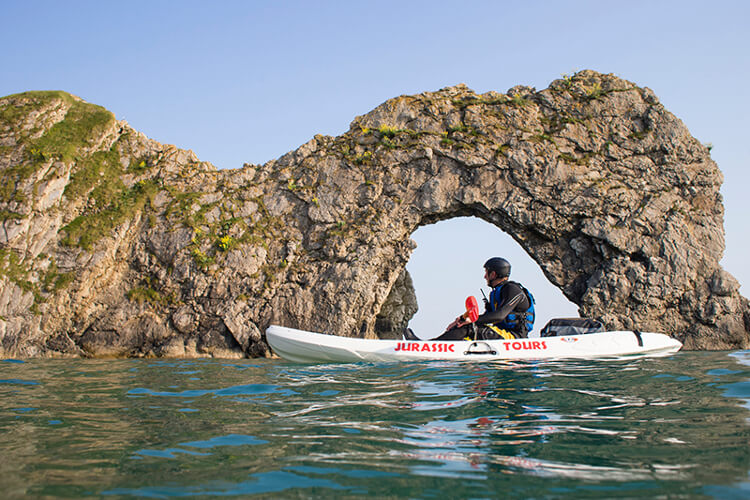 At 8:45 I made my way to the meeting point at the Jurassic Coast Activities HQ near the main town car park. I was told that today was a quiet day for the kayak tour and only three other people would be joining the tour. I was quite pleased about that, a smaller group can move further and faster and hopefully see more of the coast. I was given a wetsuit, helmet and lifejacket and was pointed in the direction of the changing rooms. As I was getting changed I could hear that the other three people had arrived as well. We would soon be on our way.

After the typical formalities of introductions and safety briefings we followed our guide outside and picked up our kayaks. As there were four of us we would be using two-man kayaks for the trip. We wheeled them down to the beach and were in the water within minutes.

In the protection of the cove the water was calm and the paddling easy, but the weather was on the turn and as we reached open water the wind was strong and the swell seemed to lift us and drop us every few seconds. 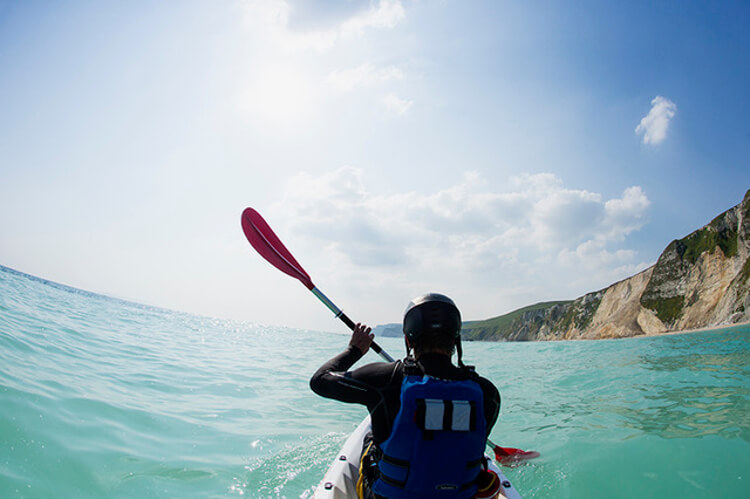 My initial excitement turned to nervousness for a few minutes as some sizeable waves hit the kayak and rocked us from side to side. I wondered how big these waves would need to be to flip our kayak over and dump us in the sea but our guide seemed unconcerned so I soon settled down. We made good progress along the coast and the opening into Lulworth Cove was soon out of sight. The paddling felt like hard work at times, most of my kayaking experience came from lakes where there are no waves, swells or currents to contend with.

Within a few minutes our guide signalled to a small hole in the cliff face, known as Stair Hole, we paddled through the hole and found a small cove on the other side, almost hidden from the sea. We stopped for a few minutes while our guide pointed out the Lulworth Crumple, layers and layers of limestone that made up the edges of the cove and made this area so geologically important. It was a great experience to be able to paddle right into this cove and get so close to these limestone features.

On the way out of the cove we paddled into a small cave that extended a few metres into the rock. It was dark and narrow, just wide enough for a kayak. We had to hold our paddles parallel to the kayak and use our hands to push ourselves deeper and then use the same method of pushing off the rock overhead to get back out. You would never know this cave was there unless you were on a kayak, it was hidden from land and far too small for any other kind of boat to venture in. 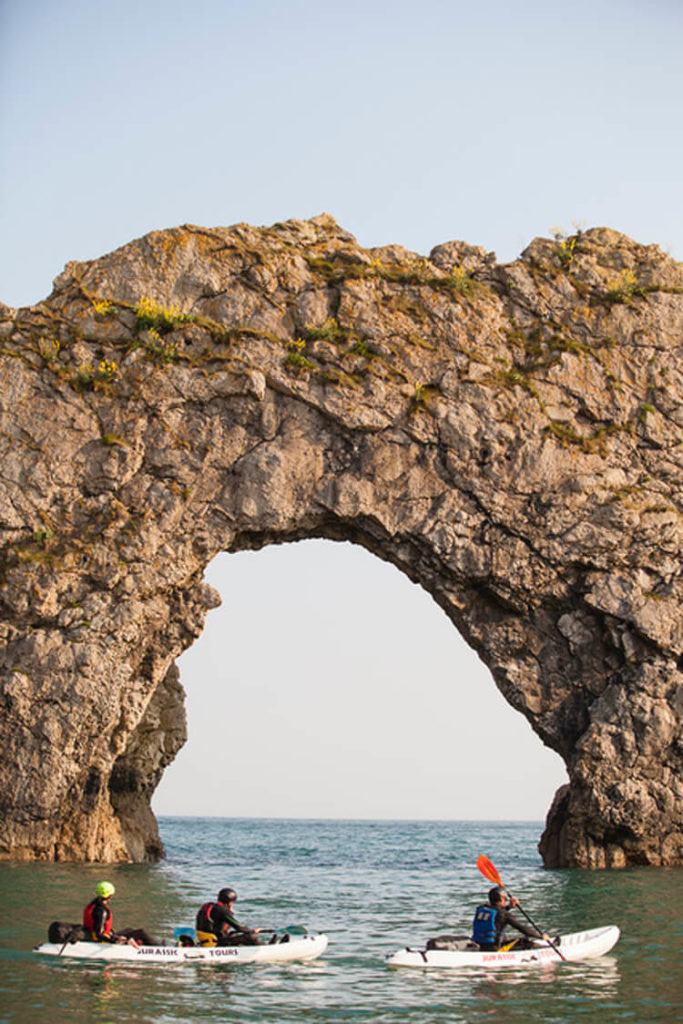 We continued along the coastline, heading towards Man O’War Bay. The weather had really changed by this point and the clear skies of the morning were being replaced with thick cloud. The wind had picked up and the paddling was hard work. We knew that Durdle Door wasn’t too far away though and for all of us, that was going to be the highlight of the trip.

We stopped in Man O’War bay for a quick rest, we pulled the kayaks up onto the beach and drank water and ate a chocolate biscuit each for energy. As we sat and rested we watched a Peregrine Falcon flying high above us, they nest on the cliff tops here and explain why there aren’t too many seabirds to be spotted in this location.

Reenergised and raring to go, we jumped back in our kayaks and paddled hard to get out of the cove against the waves, our hard work was rewarded almost instantly and Durdle Door was within sight. We paddled closer and stopped to take photos and turn on our GoPros. This was what we were here for.

There are many ways to explore Dorset, there are dozens of clifftop walks and coastal trails you can follow, but if you’re feeling adventurous paddling through Durdle Door and exploring the caves and geological features of the area is highly recommended. If you’ve got a bucket list, you should be adding this to it and making plans to tick it off.

We like to say a huge thank you to Rob for his wonderful guest post about the Jurassic Coast! If you’d like to book your own adventure and stay in luxurious accommodation, Wareham Forest Lodge Retreat is waiting for you!

Written by Jess Hawley • 5th September 2017
share
back to blog