Get set for another high-flying panto as Aladdin opens in the Rhyl Pavilion for a festive season of fun! The cast of this year’s Aladdin panto really do put on the ultimate festive extravaganza for audiences. It offers everything you could ever want from a magical seasonal production, with adventure, humour and crazy costumes!

Follow the story as Aladdin (played by David Perkins) tries to convince Princess Jasmine (played by Gemma Naylor from Nick Jnr’s Go! Go! Go!) to fall in love and marry him whilst also going in search of the magic lamp, home to the all-powerful Genie, before the wicked evil villain Abanazar steals the lamp in an attempt to take over the world! 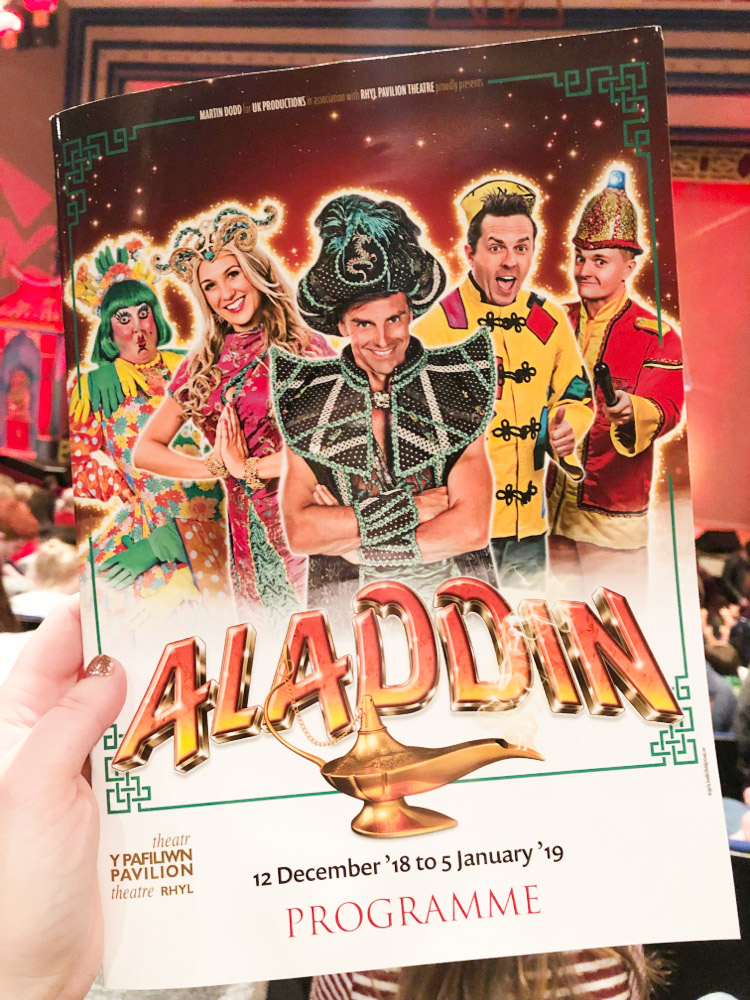 I was lucky enough to watch the show on Saturday afternoon (December 15th) and audiences (including me!) were completely wowed by this fairytale classic which features plenty of modern tunes to get you singing along. Loula Geater, who played the Slave of the Ring, blasted out an amazing rendition of ‘I Need a Hero’ and to add to the magical atmosphere there is even a flying carpet!!

Emmerdale’s Jonathan Wrather was leading this year’s cast as Abanazar, and played one of THE best baddies I’ve seen in panto. He really got the crowd going and in every scene the crowd could loudly be heard booing and hissing the character as he went about his wicked mission to steal the lamp from Aladdin’s grasp and take over the world. There were plenty of great references to his time in the famous soap’s village which will be an added treat for any Emmerdale fan – as a big fan of the show I loved all the added extra nods to the soap!

Tom Whalley as PC Pong provided plenty of slapstick and the scene featuring PC Pong, Wishee Washee and a big new washing machine was one of my favourite scenes of the show. It left the audience in hysterics, long after the curtains had closed on the scene.

Local acting legend, Sean Jones, returned for his seventh annual pantomime in the role of Wishee Washee, again providing plenty of local references and humour. The audiences just love him and his comic timing is second to none. He even managed to sneak in several renditions of the smash hit ‘Baby Shark’ which had all the young ones in the audience out of their seats and singing along! A true comedy legend who I hope will be in the Rhyl pantomimes for many years to come.

Of course, a panto isn’t a panto without a hilarious dame, her adventurous and wacky costumes and the cheesy lines that will still make you chuckle days later! This year’s Rhyl Pavilion dame didn’t disappoint, Simon Jessop plays the wonderful Widow Tawnkey, providing plenty of jaw-dropping, laugh-out-loud moments. The costumes are a sight to behold!!

The supporting cast comprising of two local talented dance schools, The Gay Harris Dancers and The North Wales School of Dance were also superb and a great addition to the production. Adding plenty of sparkle to the show!

Rhyl Pavilion’s 2018 Aladdin pantomime really did provide a perfect selection of entertainment, audience participation and family friendly humour. This is one you’ll certainly not want to miss!

Aladdin will be in the Rhyl Pavilion until Saturday 5th January 2019. Tickets for this magical production are priced from just £10! Book your tickets by calling the box office on 01745 33 00 00 or visit the Rhyl Pavilion website to book online.

Written by Annie Roberts • 17th December 2018
share
back to blog