Take a chance on the heart-warming musical Mamma Mia! and you will not regret it! The first UK tour of the smash hit musical has stopped in Venue Cymru to bring a bit of Greek sunshine to the North Wales coast.

Featuring all the top hits from one of Sweden’s biggest pop groups ABBA, Mamma Mia! has been cleverly weaved into a timeless story of family and friendship and set on an idyllic Greek island (what more could you ask for from a musical?). It provides the perfect pick me up and has you leaving the theatre with a smile on your face and the catchy ABBA tunes repeating in your head!

From West End to global phenomenon, the London production of Mamma Mia! is now one of only five musicals to have run for more than 10 years on Broadway and in the West End. In 2011, it became the first Western musical to be staged in Mandarin in the People’s Republic of China. Thanks to the 2008 movie of the same name featuring the likes of Meryl Streep, Pierce Brosnon and Julie Walters, the production just keeps growing in popularity and it has fans across the world who adore everything Mamma Mia!. A sequel of the film is also due for release later in the year. 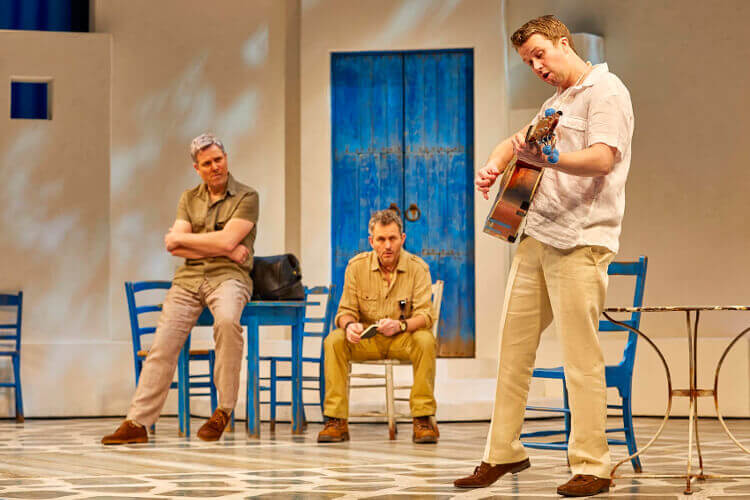 it was a super trouper night in llandudno once the cast of mamma mia! took to the stage…

For those unfamiliar with the storyline, it follows 20-year-old bride-to-be Sophie Sheridan, who after finding her mother’s old diaries, decides to get in contact with her three possible fathers. Audiences are taken on a journey through the ups and downs of her discovery and the plans for her upcoming wedding. Whilst Sophie’s Mother, Donna, is confused after finding her old flames back on the island after 21 years but thankfully her old friends Rosie and Tanya are around to provide plenty of humour along the way! 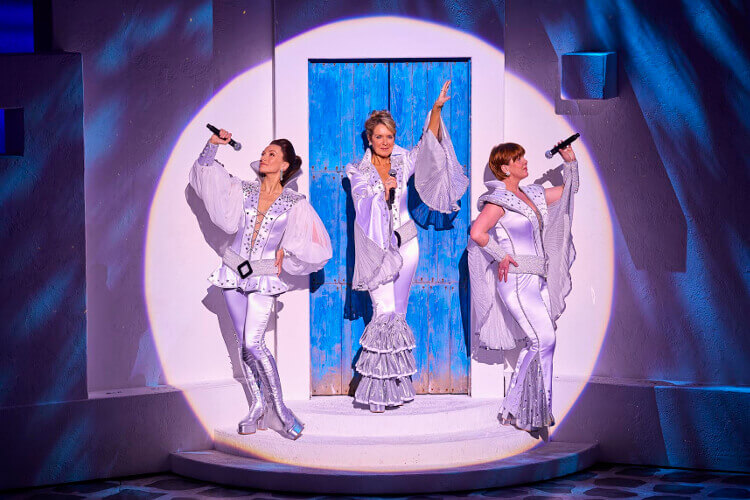 The stand out performances for me on the night had to be from the trio that is ‘Donna and the Dynamos’. Helen Hobson played a superb portrayal as Donna. Her rendition of The Winner Takes It All was heart-wrenching and so powerful, it left audiences cheering for a while after her performance. Emma Clifford played Tanya and for those who know the movie – her scene where she sings Does Your Mother Know was one of the funniest scenes and I have to give credit to Louis Stockil who played Pepper for his athleticism during that scene! WOW! Finally, Gillian Hardie as Rosie provided humour in bucket loads, one of the final scenes where she sang Take A Chance On Me had to be one of my favourite.

From the cleverly designed staging which takes you in and out of the hotel to the talented ensemble who provided a show-stopping spectacular when it came to Voulez-Vous – Mamma Mia! brought plenty of entertainment. With music and lyrics by Benny Andersson & Björn Ulvaeus, it’s easy to see why by the end of the performance audiences were on their feet, mimicking the dancing queen moves and roaring with applause. Enjoy the sound of Dancing Queen; Honey, Honey; SOS and Thank You for the Music to name a few.

You can catch Mamma Mia! at Venue Cymru until Sunday 14th January. Tickets are on sale on the Venue Cymru website or by calling their Box Office 01492 872000.

Written by Annie Roberts • 11th January 2018
share
back to blog