Head to Club Tropicana in Llandudno for a dose of Spanish holiday fever and comedy galore! Club Tropicana really does pack the holiday punch – grab your sangria and get ready for a lot of laughs, as the cast really do provide a night of comedy to remember.

The storyline centres on a young couple, Lorraine and Olly, who are due to get wed (set in the 80s) but when Lorraine gets cold feet, her mum and best friend persuade her to use her honeymoon as a chance to start again. Little do they know, that her groom and his best men also go on a lad’s holiday and end up checking into the same hotel, Club Tropicana. 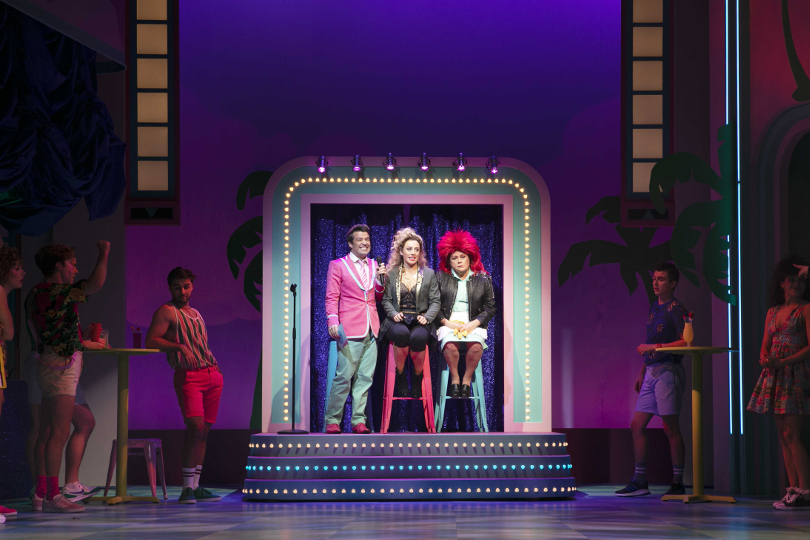 Now, I might not have been born in the 80s but BOY do I love the music from the decade (give me a bit of Cher, Wham!, David Bowie or Yazoo any day!). This musical oozes 80s vibes, with plenty of neon colours and hints to the decade such as the brick mobile phone, the use of Pesetas and not Euros and of course shoulder pads, lots of shoulder pads!

The whole cast provide a feast for the eyes and ears and it’s packed full of well-known stars, including Neil McDermott probably best known as Ryan Malloy in Eastenders and Amelle Berrabah a former member of the Sugababes. It really is a jam-packed musical with super vocals especially from Karina Hind (Lorraine) and Cellen Chugg Jones (Olly) who made it look effortless to sing the high notes in Take on Me! 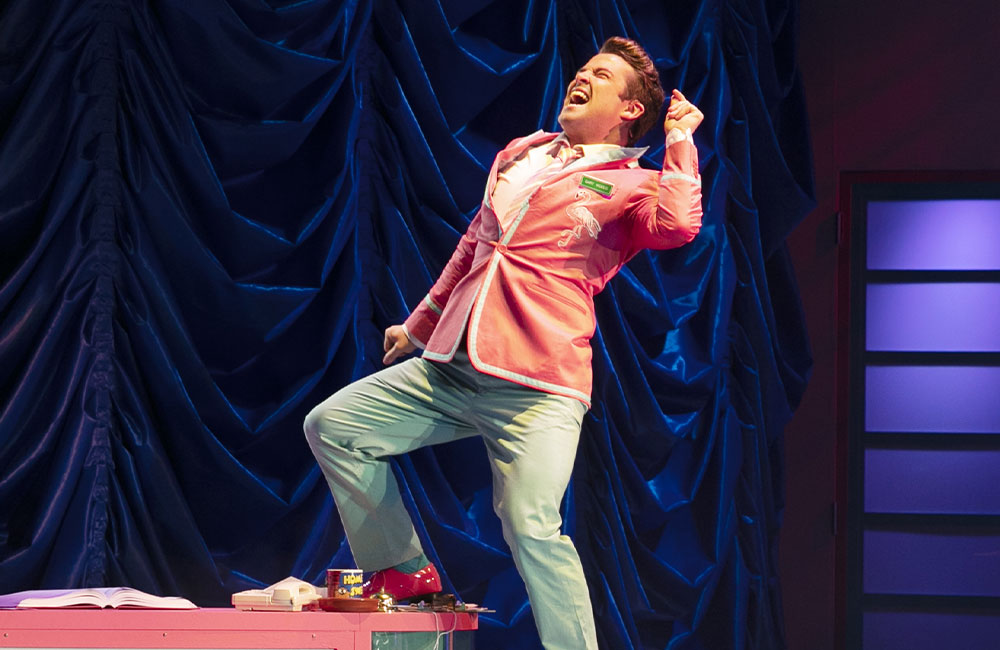 I’ve wanted to see Joe McElderry perform live for years (probably since he won X Factor back in 2009!) and I was certainly not disappointed to see him take on the over the top camp performance of his character, hotel entertainer, Garry. He had audiences in stitches throughout the show and his final performance of Relax had me singing all the way home.

Kate Robbins plays Spanish cleaner Consuela and produces some fantastic impressions from Cilla Black to Shirley Bassey, Maggie Thatcher and Tina Turner – you name it, she can do it. Her comic timing was adored by audiences and her famous sign (you’ll have to see it to know what I mean!) became an iconic talking point throughout the musical. For me, she stole the show.

It was also great to see Rebecca Mendoza back on stage. I first saw her in Hairspray the UK Tour last year at Venue Cymru and thought she was fantastic so when I found out she was also in this UK tour of Club Tropicana I couldn’t wait to see her take on another role. She packed her character, Tracey, full of comedy, I was laughing every time she came on stage and her Cher outfit was one of my favourites of the night (where can I get one of those!?).

Sadly I was a bit disappointed that the title track was missing but the production more than made up for it with the likes of Girls Just Wanna Have Fun, Relax and Call Me to name just a few of the 80s bangers performed on the night!

If you loved Benidorm Live earlier this year then you’ll love Club Tropicana. It’s packed full of comedy but is also the perfect tonic for a good boogie and you’ll feel like you’ve been transported to the sunshine!

So what are you waiting for? Find those neon leg warmers and head down Venue Cymru to catch Club Tropicana! You’ve got until Saturday 29th June

Written by Annie Roberts • 26th June 2019
share
back to blog