I was unsure what to expect when heading to Venue Cymru to see The Lady Vanishes. I’d not seen the famous 1983 Alfred Hitchcock film of the same name, but this new production from Bill Kenwright and the Classic Thriller Theatre Company instantly had me intrigued… and I love a good mystery.

For those also unfamiliar with the premise of the storyline, it follows socialite Iris (played in this production by Lorna Fitzgerald) who is travelling home to get wed. Her travelling companion Mrs Froy (Juliet Mills) unexpectedly disappears during the train journey and Iris finds it odd that none of her fellow passengers wish to admit to also seeing her. With the help of musician Max (Matt Barber), Iris turns detective and together the pair are determined to find out where Mrs Froy has gone. 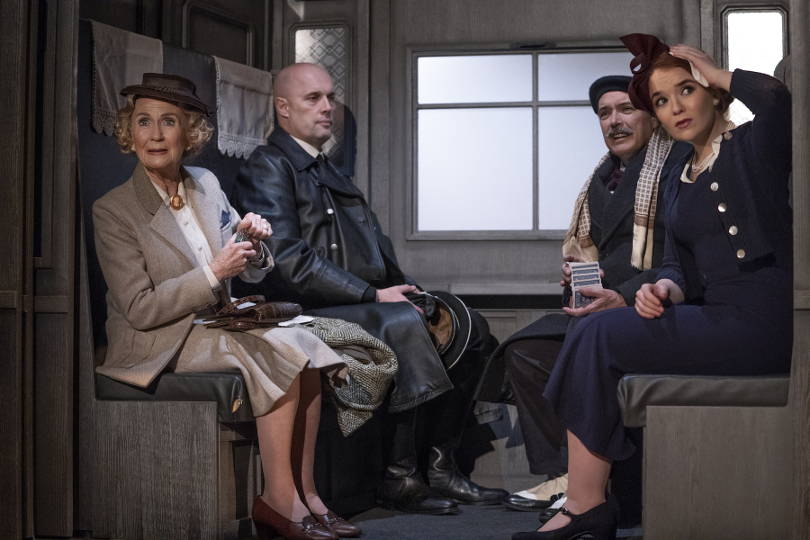 As soon as the curtain rises for the first act, audiences are taken back to the era where steam trains were the norm, the classic RP British accent was still in full force and the Nazi’s were beginning to take over the majority of Europe. The dramatic opening for the first scene sets the tone for the rest of the performance, the curtain lifts and all you can see are dark figures, a stage clouded over in smoke and the sounds of a traditional train station.

The acting in this production is incredible, the cast is filled with household names. Just to name a few, Fitzgerald is best known for her role as Abi Branning in EastEnders, Matt Barber for roles in Downton Abbey and supporting role in Breakfast at Tiffany’s on stage whilst and husband and wife Juliet Mills and Maxwell Caulfield (who plays the suspicious Dr Hartz) lead the cast. The couple who continue to quarrel throughout their train journey, played by Elizabeth Payne and Mark Carlisle added a fabulous distraction to the mystery of missing Froy.

The staging only added to the brilliance of this performance. It was cleverly designed with carriage doors that opened and closed, easily helping to turn the stage from having focus on the carriages to then being part of the train restaurant or the aisle of the train.

No two minutes were the same in this production. It’s intense, comical, thrilling and scary in parts, so be prepared to be sitting on the edge of your seat throughout and get ready for plenty of surprises. There is an abundance of mystery to be found in this stellar production.

The Lady Vanishes cast will be performing at Venue Cymru until Saturday 15th June and you definitely do not want to miss this superbly acted and thrilling play!

Tickets start from just £21.50 for this thrilling night of drama. To book your tickets just call the Box Office on 01492 872000 or visit the Venue Cymru website.

Written by Annie Roberts • 11th June 2019
share
back to blog