Get Ready For It! The Brand New Musical Filled With All The Best Take That Sing Along Songs Is Coming To Llandudno…

Let us Relight Your Fire this Autumn… we’re giving you the opportunity to attend the party of the year as Take That’s new musical The Band heads to North Wales!

You can be part of the opening night action at Venue Cymru if you enter our fantastic Facebook competition to be in with a chance of winning a pair of tickets for you and a friend.

The most-talked about musical of the year is being brought to Llandudno by David Pugh & Dafydd Rogers, who decided to take Tim Frith’s production around the UK bringing the stage show to life! Featuring all the Take That classics it provides the perfect Party Remix for fans across the country.

The Band follows five 16 year-old friends in 1992, for them ‘the band’ is everything and the music they make is the soundtrack to their lives. We’re reunited with them 25 years on as the group of friends, who are now 40-something year-old women, try once more to fulfil their dream of meeting their heroes.

The boyband will be played by AJ Bentley, Nick Carsberg, Yazdan Qafouri, Curtis T Johns and Sario Solomon, who, as Five to Five, won BBC’s Let It Shine last year, one of the judges of the show being the lead singer of Take That Gary Barlow.

They will be joined on stage by Rachel Lumberg as Rachel and Faye Christall as Young Rachel, Emily Joyce as Heather and Katy Clayton as Young Heather, Alice Fitzjohn as Claire and Sarah Kate Howarth as Young Claire, with Jayne McKenna as Zoe and Lauren Jacobs as Young Zoe making up the cast who will bring The Band to life for 12 days at Venue Cymru in Llandudno. 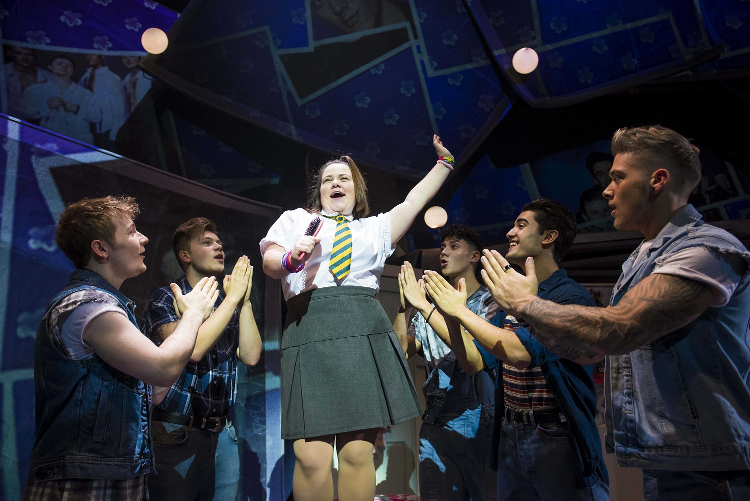 Audiences at the opening of the musical at Manchester Opera House were treated to a massive surprise when Take That and Lulu took to the stage to add that finishing Shine to the production.

Take That were said to be Holding Back the Tears at the opening night of their first production which saw them take on the role of theatre producers. Since that opening night the show has gone from strength to strength and is now the fastest-selling musical theatre tour of all time.

This show promises to keep you Up All Night so don’t miss your chance to see the breath-taking brand new production before it hits London’s West End.

The Band runs from 14th to 25th November at Venue Cymru and we’re Sure you’ll enjoy the rollercoaster show. Book your tickets online now on the Venue Cymru website or call the Box Office on 01492 872000.

So How Deep Is Your Love for Take That? Tag a friend over on our post on the New Pines Facebook to be in with a chance of bagging the pair of tickets we have up for grabs for the show stopping musical’s opening night at Venue Cymru on Tuesday 14th November!

Count your Lucky Stars and Hope you’ll be part of the Take That Party which promises to be the Greatest Day of your life!

– To enter the competition, one must tag another Facebook user
– Only one entry per person (but you can tag each other)
– Competition closes at 4pm on Tuesday 31st October and a winner will be selected at random
– The winner will be picked at 4pm and announced by 5pm on Tuesday 31st October 2017 (have a little PATIENCE)
– We’ll notify the ‘tagger’ on Facebook and ask them to contact us with their details via private message. The ‘tagger’ will be sent details of how to obtain both tickets and are responsible for sharing the prize with the ‘taggee’
– Not open to employees or affiliates of New Pines or Darwin Escapes
– Prize must be claimed via direct message by midnight on Friday 3rd November 2017
– Cash alternatives are not available
– Alternative dates/times/theatres are not available – tickets are for ‘The Band’ 14th November 2017 7:30pm at Venue Cymru
– Travel and accommodation is not included
– Prize is non-transferable
– The manager’s decision is final

Written by Annie Roberts • 24th October 2017
share
back to blog