The Springs Resort & Spa has been open for a few weeks now and we wanted to catch up with the interior guru behind the interior design.

We have worked with Harriet Lazzeri from Lazzeri Creative Interiors before when we were opening our stunning Rivendale Lodge Retreat. And earlier this year Rivendale was nominated in the Restaurant & Bar Design Awards 2021. So when we were designing The Springs we knew Harriet would be the perfect match for creating the most stunning rooms and bringing the stunning Tudor-style house back to life. Now that The Springs is open we have caught up with Harriet and asked some questions about all things interior design.

I live near Nottingham with my partner, stepdaughter and Border Terrier puppy Chewi. 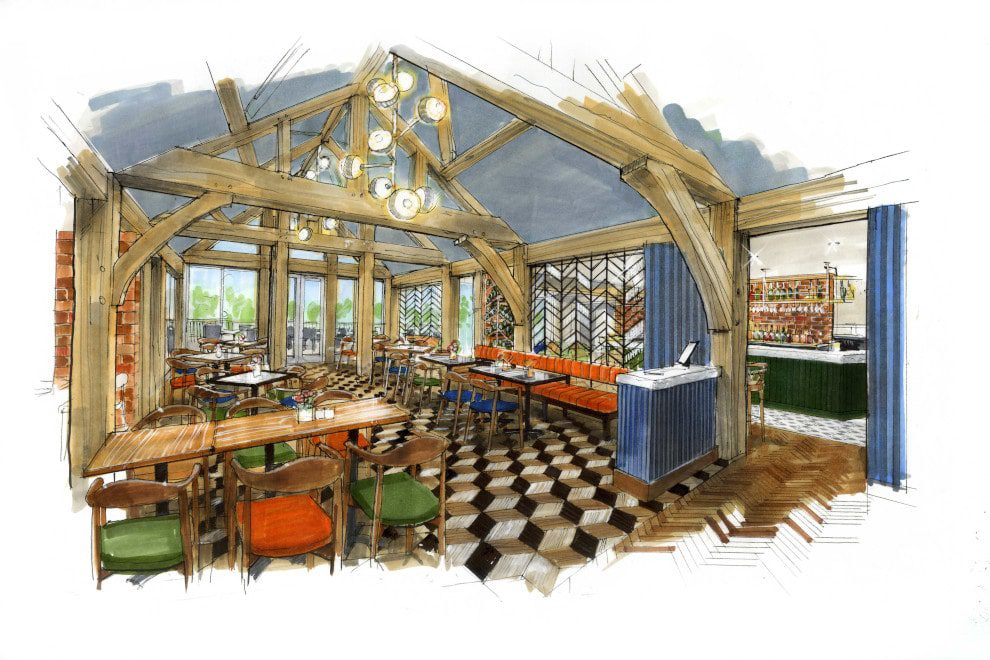 2. When did you start to have an interest in interior design?

Initially it was all about Architecture for me – from about aged 12 I used to spend hours designing houses for myself and family. I went to uni in Liverpool to study Architecture, but after graduating I worked in a few Architecture practises and realised I was more interested in what was going on inside the buildings; how people used and moved through the spaces and how they made them feel.

So from that point on I redirected slightly to Interiors and joined a small company in Birmingham who specialised in office interiors, and have never looked back. I think the faster pace also appealed to me – some Architecture projects can take years just to get through planning whereas most Interior projects are finished much more quickly.

3. When did you start your company?

It was back in February 2018. I had moved from Birmingham to Nottingham about 6 months previously and was hating the commute back to Birmingham each day, which was taking me about 2 hours each way with all of the traffic. I had moved to Nottingham to move in with my partner and I felt like I saw him less! The company I worked for then made some redundancies in the wake of the Brexit vote and it just made sense for me to go – I worked freelance for them for a few months while I got the business up and running and it has gone from strength to strength.

4. What was your first impression of The Springs when you visited?

My first impression was that it had so much potential to be a really stunning space and how forlorn it looked all empty and fenced off.

It had such great bones with the ornate panelling, the high ceilings, the sweeping staircase and that amazing view over the millpond, but it was covered in mould and graffiti and unfortunately had damage from people breaking in. There was no electricity so walking around the basement using our phone lights and stepping over dead pigeons was an interesting experience!!

As soon as I walked around I was so excited to get back to the office and start designing, to bring the building back to its former glory.

5. Did you learn anything interesting about The Springs or the local area when researching?

So many things! And we have tried to feature or mention as many references as we could throughout the Reception building and the Clubhouse. The now Spa Reception features the only known replica of the ceiling in the Scottish hunting lodge of King James 1.

The first owner who commission the construction of the building was a diplomat called Sir Alexander Condie Stephen – he was feature in Vanity Fair magazine (you can see the portrait up on the First Floor landing). The second owner, Sir John Wormald, owned the company that invented the sprinkler system. He was hugely philanthropic within the nearby village of North Stoke and is held in high regard.

It was bought and converted into a hotel in 1973 by Ian Gillan the lead singer of Deep Purple, who also commissioned the guitar shaped swimming pool (unfortunately this had to be filled in!) The famous contralto Opera singer Dame Clara Butt lived nearby – the Willow Warbler suite is themed around her. Agatha Christie lived and wrote in nearby Wallingford. Rowse Honey are also based in nearby Wallingford. 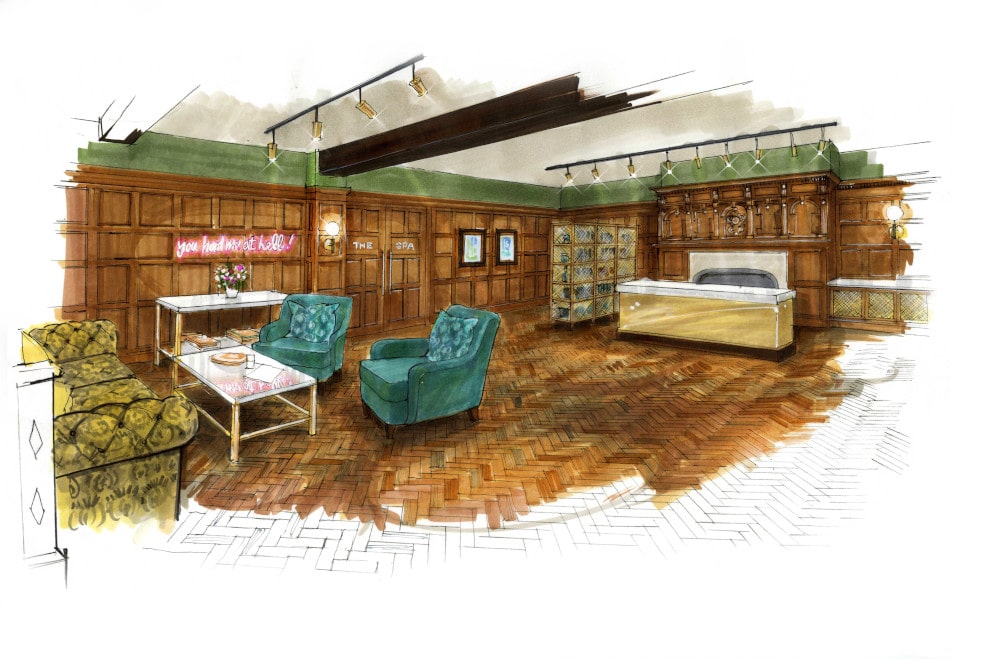 6. What was the main inspiration for The Springs décor?

The design intent for the Springs encompassed a few things – it needed to celebrate the history and features of the building and feel like a country house again, but with a modern and quirky twist and some eclectic features.

I wanted the Bedroom Suites to all have their own identity – as they all have different sizes, shapes, windows and ceilings etc. it made sense that they weren’t all based on the same scheme, that some are more airy and others more cosy. I also thought it was important that whilst some elements were traditional, other areas were a bit of a surprise like the black basement corridor to the treatment rooms.

7. How did you incorporate golf into the designs?

Although there are some references to golf in the artwork in the building, the main golf items are in the Clubhouse. We felt it was important that the building be slightly separate in style from the golf theme as there may be suite or lodge guests who were more interested in other things such as walking, the countryside, the spa, nearby attractions etc. who we didn’t want to alienated by it being overly golf themed.

The Clubhouse has the Spike Bar which is very much designed around golf with lots of golf themed artwork, balls and clubs on display, with the rest of the building having more subtle nods to golf – a repeated texture is perforated panels used on the feature staircase chandelier and the counter front of the pro shop which references the pattern on a golf ball, and many of the other lighting pieces feature illuminated globes to emulate golf balls. Also look out for the feature golf ball display coffee table. 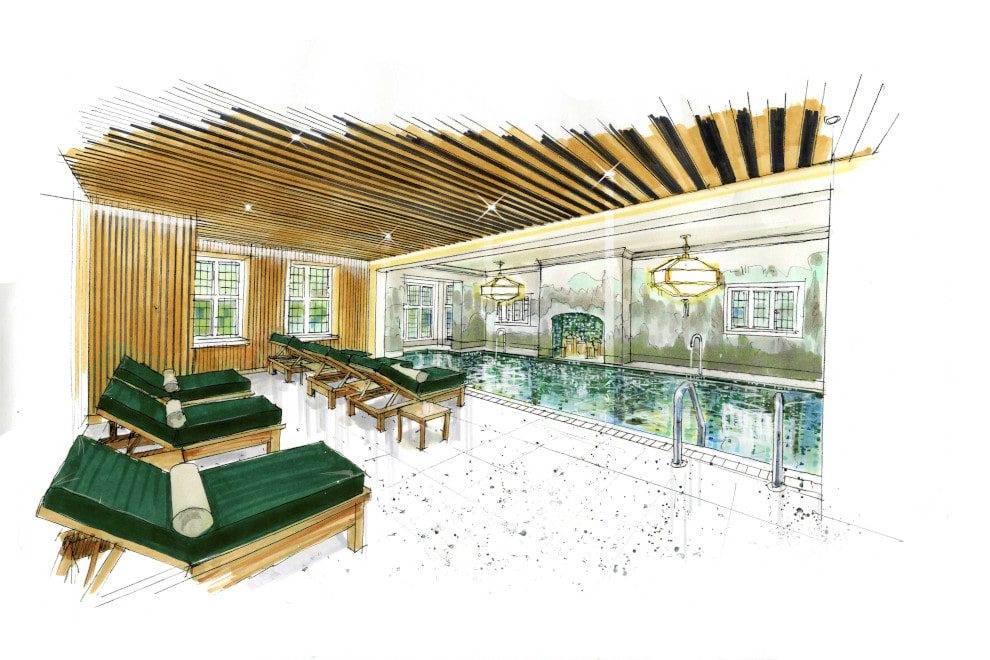 8. What was your inspiration for the pool décor specifically? It’s very outdoor/indoor type feel with the wallpaper

The theme behind the pool interior scheme is “ethereal nature”- with the misty tree mural, the view of the woods through the beautiful bay window and the timber slatted wall cladding I wanted guests to feel like they could be swimming in a clearing in a forest somewhere. We wanted to blur the lines between outside and inside, and create a feeling of being surrounded by nature.

For the Spa I was keen that we didn’t go down the route of Buddha’s and Lotus flowers as the spa is in an English country house and it didn’t feel very authentic. With the stunning Chiltern Hills and The Ridgeway as inspiration the design is centred around nature, combined with accentuating the existing beautiful period features such as the panelling and ceiling of the Spa Reception and Lounge, and using subtle references to period design with the Regency style teal paint and traditional crystal chandelier.

There are references to local flora and fauna throughout, with woodland scenes and natural timber finishes. Utilising the panelling in the Spa Lounge with feature wallpaper inserts creates a feeling of a traditional Victorian orangery, with beautiful views over the Millpond where the Springs got its name!

10. How much did the size of the bedrooms influence your bold colour choices?

Very much so! With some of them being quite small rooms we knew they needed to have a big impact and be full of quirky features. Some of the best hotels in cities around the world that have smaller bedrooms are so successful because they are bold with their designs. By using feature wallpapers and bold paintwork combined with stunning tiles in the bathrooms creates a luxurious feel, full of talking points.

11. How does it feel to see your designs come to life?

It’s one of my favourite parts of a project! There is always a slightly nerve wracking period where you question decisions but seeing it all come together in real life is worth the stress!

12. If you could only choose one of the rooms you designed which would you choose?

Ooh that’s a tough one. Surprisingly one of my favourite rooms is the basement Relaxation Room – with timber slats on the walls, monochromatic tree wallpaper, draped curtains for privacy between the loungers and the warming fireplace it feels cosy and intimate and the perfect place for a snooze after a relaxing massage.

Why not come to The Springs Resort & Golf Club and see how Harriet designed all of the rooms. Relax and unwind in the spa or enjoy a bite to eat at The Ridgeway Restaurant.