The Making of Harry Potter Studio Tour is only a short distance from our own Tilford Woods Lodge Retreat! Our retreat is located in the heart of Surrey, perfectly placed to explore all the picturesque region has to offer, and Harry Potter fans will be delighted to know that we are only 1 hour and 40 minutes’ drive from the studio tour! So why not make a weekend of your Harry Potter trip and explore all that Surrey has to offer too? If you want to know all there is to know about the studio tour, then settle in with a cuppa and read on…

Various sound stages and sets were created throughout the Harry Potter movie series, including The Great Hall, which was built in 2000 and was used for the next 6 movies. The set includes handmade costumes and two large tables set ready for dinner, as well as breath-taking props like Professor Dumbledore’s lectern and the House Points Counter. A newer addition to the tour is the Forbidden Forest, with 19 handcrafted trees, each 12 feet in diameter. 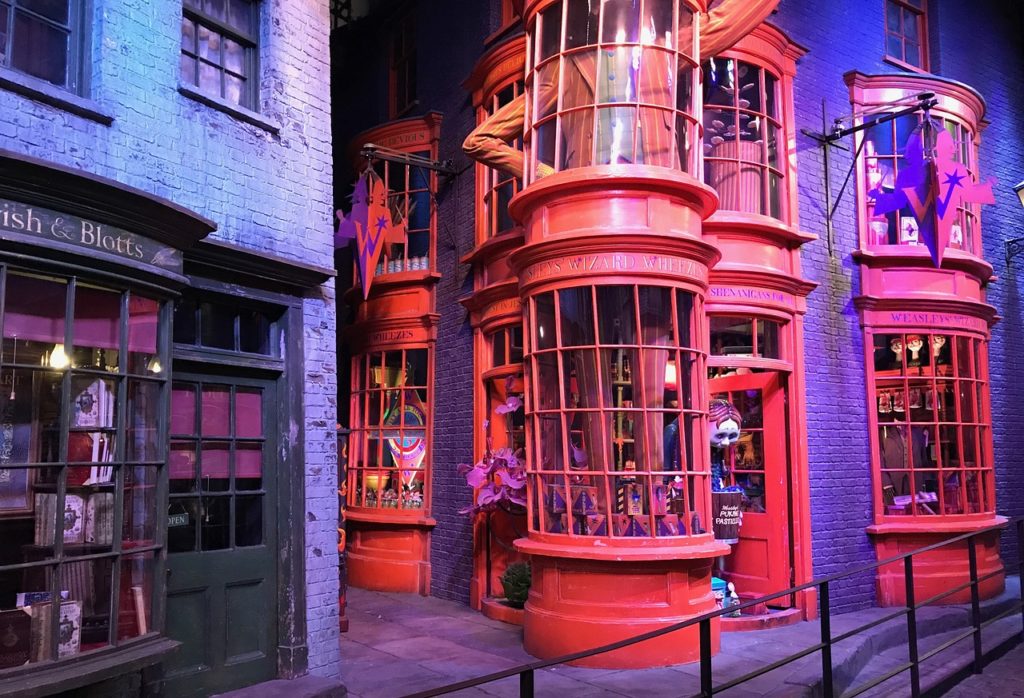 Other sets include Platform 9 3/4, which was built for the Deathly Hallows Part 2 movie, with previous scenes shot at Kings Cross Station in London, however the set was constructed for the final movie, complete with tracks and the iconic Hogwarts Express train. You’ll also get to walk the magnificent Diagon Alley set, lined with store fronts such as Gringotts Bank, Flourish & Blotts, Weasleys’ Wizard Wheezes and of course, dusty old Ollivander’s, which was home to over 17,000 individually labelled boxes of wands during shooting.

marvel at the spectacular props

The extraordinary talented Propmasters on the Harry Potter series created beautiful items to bring the wizarding world to life, they even created over 950 potions jars to line the classroom, all with something unique inside them, including herbs and shrunken heads. They also created 900 memory labels for Professor Dumbledore’s Memory Cabinet, with the labels including names such as Professor McGonogall and Argus Filch.

The unsettling pink room of Professor Umbridge’s office was expertly decorated by the art department, with over 130 plates of cute kittens, which meant the department actually filmed kittens with witches hats and balls of wool (sounds like heaven to me!). But nothing is as striking as the 20 foot mannequin above the entrance to Weasleys’ Wizard Wheezers store front. Except maybe the funny and equally disgusting Pucking Pastilles dispenser on the store front, outstanding work by Head Propmaster, Pierre Bohanna.

Costume Designer, Jany Termime, really helped bring the wizarding fashion alive throughout the series, from the Quidditch uniforms which evolved from heavy robes to lighter, sportier robes with names and numbers on the back. She also created breathtaking wizard formal wear for The Yule Ball, putting the boys in wizard tuxedo-style robes, and also made Hermione’s showstopping layered, Chiffron gown. Ron’s wizards robes were actually made from acres of lace and old carpet fabric (he pulled the look off well considering!). 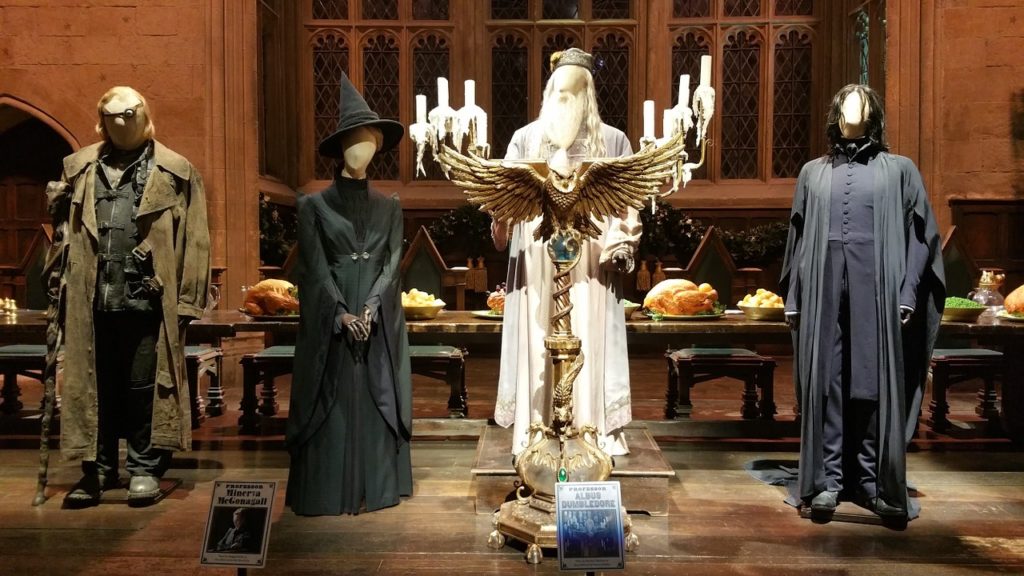 details of the art department

The Art Department created everything for the movies, but the true jewel in the crown is the Hogwarts Castle Model. It was built for the very first movie and every turret, tower and courtyard was filmed, the makers installed more than 2,500 fibre optic lights which simulates torches and lanterns, and giving the illusion of students wandering the halls. The Art Department created thousands of props to bring the wizarding world to life, they made sweet packaging, fantastic textbooks and even issues of the Quibbler. By the end of the Harry Potter saga, over 40 editions of The Daily Prophet were designed.

There were many magical creatures created on the Harry Potter films, from the huge Basilisk mouth that was made for the final battle scene in Chamber of Secrets, which was 30ft long and had 3ft deep jaws. There were 3 Buckbeak’s, created for the movies including one laying down, another rearing and one standing, with each Buckbeak having every individual feather inserted and glued into place, as well as designers talking to physiologists and vets about the proportions of the mythical creature. Aragog was also physically created for the movies, he actually had a leg span of 18 feet, and the model was able to crawl out of his hole and even deliver dialogue (Ron was right to be squeakily terrified!). Each hair was individually inserted by hand and the hairs varied from pieces of coconut, to the centre of feathers and even broom bristles.

The Art Department worked tirelessly to create everything from the wizard world they could, even creating the amazing Chamber of Secrets Door. The door is often thought to be CGI, but it’s actually a fully operational door, which includes articulated snakes and motor to make sure they all move at the correct time. The temperamental Whomping Willow tree is iconic of the Harry Potter series, the full sized tree trunk and mechanically operated ‘whomping’ branches were created, with other branches being added in via CGI.

This is just the tip of the magical wonders awaiting you at The Making of Harry Potter Studio Tour, you’ll get the chance to sample some Butterbeer or hop on a broomstick and fly over London via the spectacular green screen experience too!

After your Harry Potter filled day, you can return to the tranquillity of Tilford Woods Lodge Retreat and explore all the beauty that Surrey has on offer. We offer stunning accommodation, which includes hot tubs and private saunas, with some lodges including views of a peaceful lake to top it all off, when you holiday with us at Tilford Woods you really will have a magical weekend worthy of Hogwarts (too cheesy? I’m not even sorry…).