Enjoy a Harry Potter Weekend in Beautiful York. The beautiful walled city of York boasts a number of world famous attractions. These include historic buildings such as York Minster, St. Mary’s Abbey, the beautiful city walls and a range of World Class museums & exhibitions that provide hours of entertainment & intrigue for all of the family. More recently however, York has started to become a major attraction for Harry Potter fans (AKA “Potterheads”) from around the world. York has embraced the Harry Potter theme that is growing amongst the city – which all seems to have begun thanks to the iconic medieval street that can be found there – The Shambles. Read on to find out what other treats are in store for fans of the J.K. Rowling books…

Often referred to as “Harry Potter Street”; the Shambles is said to have been the inspiration for Diagon Alley – the iconic alley that appears in a number of the books & movies. Once packed with butchers and meathooks; the beautiful street has been preserved over the centuries; maintaining a range of historic features and its original character.
It appears that Harry Potter is having an increasingly strong influence upon the street, thanks no doubt to the power of the hordes of fans who visit the Shambles each year. The café at The Flax for example has reportedly developed a number of unique Harry Potter items on their mouth-watering menu – including a delicious ice cream!
The street is a must-visit for any true Potterheads, thanks not only to its uncanny resemblance to Diagon Valley; but for the 2 Harry Potter shops that currently reside there… 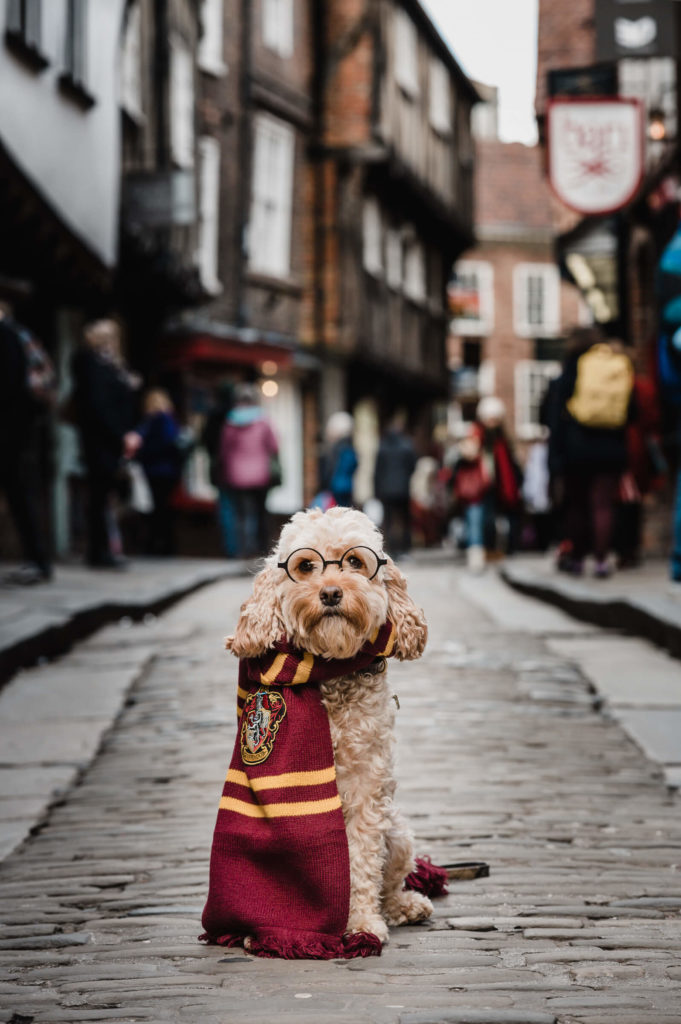 Enjoy The Wizard Walk of York, a magical walking tour that leaves from The Shambles and is heavily inspired by Harry Potter and the wizarding world!

Boasting a range of amazing Harry Potter merchandise and gifts, The Shambles is becoming the go-to-place in the UK to satisfy all of your Harry Potter needs. The street currently has 2 shops dedicated to the book & movie series, with a third at the planning stage…

The Shop That Must Not Be Named

Located at the 30 The Shambles, York – The Shop That Must Not Be Named is a real treat for Harry Potter fans young and old. The shop sells everything a wizard could need, including cloaks, wands and official merchandise. Opened in May 2017, the staff have already developed a reputation for being extremely enthusiastic when it comes to anything Harry Potter related and equally helpful when it comes to choosing a trusty wand or an attractive wizard’s hat.

The World of Wizardry

Just a short stroll down the street is another treat for Harry Potter fans – The World of Wizardy. Brimming with more Harry Potter merchandise than you can shake a stick/wand at, the shop opened in late 2017 with hundreds of fans queuing to get inside and there was even a Harry Potter lookalike on hand for photographs! Stocking wands, mugs, scarves and everything in between, the shop is Harry Potter heaven.

The third Harry Potter shop is due to open at numbers 22 and 23 on The Shambles according to planning documents. Two shops are being combined into one large Harry Potter merchandise store!

Shying away somewhat from the Harry Potter limelight, York Railway Station is an interesting place to visit for Potterheads. Set at King’s Cross station, the bridge that Harry and Hagrid walk over in The Philosopher’s Stone is actually the one found at York Railway station.

It might be best to visit the train station away from rush hour!

Enjoy a Harry Potter Weekend with a Stay at the KP Club in Pocklington.